What an incredible time we had attending the 101th California Moving and Storage Association Convention in San Diego, Ca. The convention was held at the Paradise Point Resort and it started on Tuesday April 23rd thru Saturday April 27th. In attendance, we had delegates from all twelve chapters, industry partners and representatives, mover and associate members and for the first time in the recent history of the association, REGULATORS! If you are short on time, and don't want to read the entire post, please head down to the blue text!

We joined the convention on Thursday and attended the Exhibitors Welcome Reception which was sponsored by New Haven Moving Equipment Corp. We enjoyed visiting with many of the vendors on site as well as with other fellow movers.

On Friday we attended breakfast sponsored by Victory Packaging. We heard John Kay was up early making sure the potatoes and eggs would come out just right!

Olga Garcia and I had the honor to serve as Master of Ceremonies. We had the honor of introducing industry legend Mr. Joe Hammer, of California Relocation Services, as well as Jesse Chabot of Golden West Moving Systems who lead the invocation and memorial.

Next, we introduced our Keynote Speaker “Antarctic Mike” a known inspirational speaker who shared with us his experiences, challenges and great accomplishments in sports and in life. In January 2006, Mike became one of nine people to have run a marathon on the Antarctic continent; 11 months later he returned to Antarctica to become the first American to complete the Antarctic Ultra Marathon, a grueling 100 km.

The association’s president Steve Weitekamp introduced our new logo. Last year for the 100th anniversary of the association, we welcomed a new logo that integrated our history but had a more modern feel, a new line with the inception year adorns the bottom portion of the new logo.

Our outgoing chairman Alan Freese, of Peninsula Moving & Storage shared pictures of his year visiting our chapters around the state. He reminisced on his time on the road with Steve and revealed the CMSA Sexiest Man of 2018. That man would make an appearance later at the Beach Party...

For the first time in recent history, we had a Regulatory Panel from the Bureau of Household Goods & Services (BHGS). The Bureau Chief, Nicholas Oliver along with an impressive group of regulators shared information on the transition from the CPUC to the DCA. We applaud the agency’s efforts in cracking down on unlicensed movers and for protecting the consumers. We commend the association for working with the regulatory agency that oversees licensing of household goods movers within the State of California, and for building a relationship early on so that our voices can be heard as policy is being written.

We enjoyed our time in front of the general session attendees and want to send a special shout out to Suddath. #Suddath

Friday night we attended the Beach Party Dinner event. Beach balls, piñatas and a photo booth made for a fun night. We want to send a shout out to A52 Signs in San Francisco for donating cutouts of Jay Casey and Steve Weitekamp to greet the guests. We were able to collect some additional funds for our chapter’s contribution to the scholarship and charity fund. Special mention goes to the Matt Connell, CEO of Total Military Management (TMM) and friends who showed up in flamingo themed suits and made the highest donation of the night to take pictures with the cutouts.

On Saturday we enjoyed a delicious breakfast sponsored by Lambert Enterprises, Inc. We are always looking up to Jeanette Homan of Lambert Transfer & Storage and it is such a pleasure to have women of her caliber within our association. During the general business session, we heard from Charles White, President of International Association of Movers (IAM). The issue of recent changes to DOD HHG outsourcing to the worldwide moving market was discussed. There is a call to action to all movers, whether you are doing only local, commercial, office or hospitality moves, the ongoing changes to the DOD household goods moves will affect us all so we need to be educated and remain active in our efforts to protect our industry.

We heard from the Van Lines. As it is usual, questions were submitted in advance, this time we had more in session Q & A. The subjects of technology, labor, consumer reviews and promoting our industry in order to get more drivers were raised.

On Saturday the Excellence Awards Luncheon was sponsored by TMM. We heard from Special Olympics representative and an athlete who has competed in figure skating, basketball and other sports. The young Olympian shared inspiring words, but some that will stick with many of us “Thank you for helping me be the best me”! The room was moved with her courage, discipline and appreciation.

Our outgoing chairman Alan Freese presented a check to the St. Jude Children’s Research Hospital, the association donated $5,000 and Alan created a GoFundMe account to raise more funds, the total was about $9,500 and Rick Bruns of Victory Packaging brought up the total to over $12,000! Way to go Mr. Chairman! The representative from St. Jude’s shared alarming statistics, such as how the care of a child with pediatric cancer costs on average $425,000. We also heard the great news that their research has found a cure, thru gene therapy, for the disease known as “Bubble Boy”. That disease is a life threatening genetic disorder which kills young patients if left untreated.

The Saturday event is one of the convention’s most favorite ones, the scholarships awardees are mentioned, one by one and the ones able to attend the convention say a few words. Here is where the months of planning events at each of the twelve chapters take shape, seeing the young students receiving their award and showing their appreciation for the scholarship is one of the most rewarding feelings one can feel! Last year, our association awarded $100,000 in scholarships in commemoration of the 100th convention, this year the Board awarded $81,000 including some vocational education scholarships.

Also, at this event, each of the twelve chapters is recognized by the Association with Certificate of Appreciation for the chapter presidents. It is here that each chapter presents their donation to the scholarship and charity fund. Olga Garcia and I were proud to present $7.350 to the CMSA. Special shout out to CMSA member Lulu's Hauling and Dennis Jenkins and Emily Thurston for their continued support in donating the bikes for our largest event, the Annual Crab Feed. Another special shout out to our Associate Member J & S Paper for being our sole sponsor of the main chapter’s event, the “Annual Crab Feed” and to non-CMSA member Rocko’s Produce from South San Francisco and A52 Signs of San Francisco for their support and donations.

The next part of the program, will go down in our history FOREVER! Yes, capital letters FOREVER! Olga Garcia and I received the amazing, awesome and total unexpected recognition of being named the for a second time in a row! In all honesty, we work hard in planning each event: Summer Kick Off Whiskey Tasting, Tech Ed for Movers at Dominic’s at Oyster’s Point, Pear Bistro Dinner in Pinole with Steve Weitekamp and Alan Freese, Annual Crab Feed at the Colma Community Center, Dinner at Chez Marius French Bistro with Attorney Conor J. Dale in San Francisco, Vendors Appreciation Night at Historic Mac Hotel in Richmond. BUT, none of it would be possible without the support of each chapter member and each associate vendor who decides to send in their RSVP, show up and bring raffle prizes for each event. We can send out flyers and call each person on the roster, but if people don’t show up, we have no meeting. So, thank you to everyone who has made it to our events, your support means the world to us and we are honored to be of service to you and our chapter.

The culmination of our convention is the Chairman’s Reception, Dinner and Ball. Here the outgoing chairman passes the gabble to the incoming chairman. Alan Freese, we wish you the best, you are a gentleman and we appreciate your candor and honest love for our industry. Thomas McCarthy, a fourth-generation mover has taken the highest seat and we are excited to see his legacy. His family’s moving business “McCarthy Transfer & Storage" celebrated their 100th Anniversary in February of this year. Thomas has led the San Diego chapter famous golf tournament and has achieved some of the highest (if not the highest) contributions as a chapter, once bringing in $25,000 to the scholarship and charity fund! I asked him once, how and he said, “reach out to everyone, even those outside the association”, and so we have and will continue to do so.

We love the convention, the resources we connect with, new and known associate members, and the camaraderie. It doesn’t matter if you only do household goods moves, military moves, international, local moves, office installations, hotel/hospitality installation, long or short-term storage, intra state or interstate moves, everyone here is family. We are competitors, but we are also each other cheerleaders, and when one of us succeeds, we all grow and cheer each other on. In that way, as many of us are entering a new territory with the changes to the military moves, we should all stand up for each other and be active in the circles that will shape policy and regulation because we will all be affected one way or another.

Not enough is said about the excellent job that the CMSA staff has done, year after year in putting the conventions together! Think about the hours of preparation, work and dedication, our jobs are to get there and attend the programs, but each minute has been planned so that everyone has a meal and a seat! Thank you so much to Renee Hifume and Gale Iwashita

If you attended the convention, I hope you have returned to work energized and fired up and look forward to connecting with you via email, LinkedIn or at one of our next events when chapter activities resume in early September. If you did not attend the convention, I hope my words here gave you a sense of what you missed, and I hope you mark your calendar for next year’s convention in beautiful Hawaii! See you on the move!

Celebrating Volunteers of Clinica Martin Baro! Thank you for your service!

6 Tips to Simplify the Moving Process

South San Francisco Chamber of Commerce: State of the City 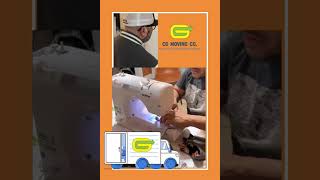 What will it take to make work-spaces safe and healthy again? Let's talk about masks and more space

Annual Holiday Dinner for Northern Region Chapter of the CMSA